The craziest and shortest poem I have ever heard!!! 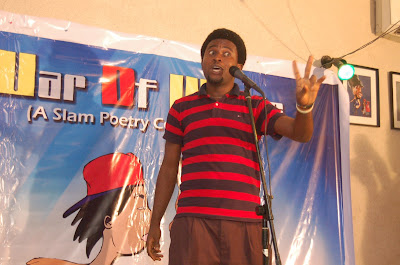 War Of Words (Slam Poetry Competition) Season 1 was fun-filled, exciting and thrilling all the way to the last performance on stage.

I heard poetic pieces that made me smile, some poems made me sober, some were thrilling and a few were simply marvelous.

But one poem stood out, why, you may ask. Well, it was short and crazy. The poet left everyone in the venue waiting eagerly for the next verse as he walked off the stage. Men, "Me likey likey plenty plenty"!!!

Watch the video below and tell me what you think.

i2X Media, the conveners of Word Up (a quarterly Spoken Word Poetry Event), held the maiden edition of War Of Words (WOW) on June 30, 2013 in Bogobiri, Ikoyi, Lagos.
WOW is a spoken word poetry competition which was organized with the aim of discovering and showcasing young and up-coming spoken word poets.
War Of Words Season 2 will start off from September 2013.
If you can kiss words and make them dance, then this is your chance.