Arch Angel on stage at WORD UP Volume 5 (First Anniversary Edition)
which held on August 17, 2013 in Lagos, Nigeria.
The poem he performed is a classic. Please watch and enjoy.

Word Up, the biggest Spoken Word Poetry Platform in Nigeria comes to town again this November 2013. This edition tagged,WORD UP Volume 6 is scheduled for November 23, 2013 at Terra Kulture, V/Island, Lagos, with the theme, "Stop the violence." 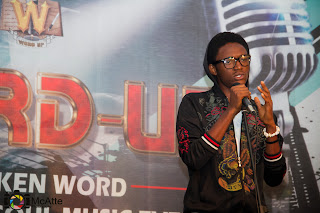 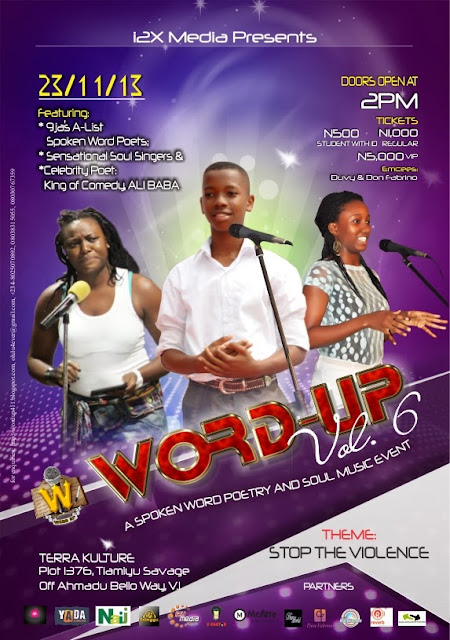 The event theme is centered around the United Nation's "International day for the elimination of violence against women."

Soul Music will be by Pure Child, Aduke and Lumynos.


The phrase violence against women is a technical term used to collectively refer to violent acts that are primarily or exclusively committed against women. Similar to a hate crime, which it is sometimes considered this type of violence targets a specific group with the victim's gender as a primary motive.
The United Nations General Assembly defines "violence against women" as "any act of gender-based violence that results in, or is likely to result in, physical, sexual or mental harm or suffering to women, including threats of such acts, coercion or arbitrary deprivation of liberty, whether occurring in public or in private life." The 1993 Declaration on the Elimination of Violence Against Women noted that this violence could be perpetrated by assailants of either gender, family members and even the "State" itself.
Worldwide governments and organizations actively work to combat violence against women through a variety of programs. A UN resolution designated 25 November as International Day for the Elimination of Violence against Women.