She was absent at the tribunal when the verdict was given, 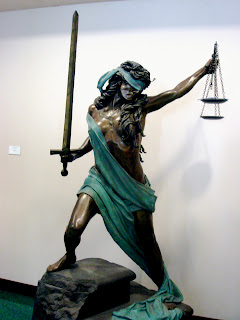 So the marauders were declared winners,
even though we know the votes were phantom.
Chaos convulses the land,
we’re on the verge of catastrophe,
the tranquility’s been shattered,
We can’t even piece together the peace,
Justice has been kidnapped somebody please call the police!
But my friends mock my naiveté
Poets that they are,
they blaspheme,
Claiming the patriotic men in uniform are part of the conspiracy.

Justice has been kidnapped in my country and nobody’s willing to pay her ransom
When was she last seen? Errrr, I can’t remember.
She was missing in the years of IBB when Dele Giwa was blown to pieces,
She was absent when Abacha reigned and Justice Auta hit the gavel, Saro Wiwa was hung,
To hell with the critics.
Justice has been missing in my country for so long,
The 4th republic gave us a made-up version of her
But she was promiscuous and so wrong,
Worst of all she could see.
Distinguishing between foes and friends of the government ,
Working through the hands of the EFCC.
Which reminds me,
Nuhu Ribadu was acclaimed her champion, that dispensation’s faithful man.
Until wiki leaked, and we heard him sing like a canary,
Humming a different tune before the Americans.

In fact, Justice has missing since the 1st republic when Awo was thrown in prison for treason,
Since the soil in Oloibiri bled oil,
And the windfall from the boom accentuated our division.
Believe now
Justice has been lost since Nigeria was found.
A friend said he saw her at Mile 12, lately
When a pick pocket was mobbed and set ablaze, maybe
That was Justice, but I’m still not sure,
Cos I see sticky fingered politicians and officials roaming free, even on TV,
sitting in the assembly were they make laws.
Justice come home we miss you,
Justice come back we need you,
Justice we weep for everyday,
Even the Church can’t remember what you look like
Though for you they fast and pray.

Activists and youths
Tweet, blog, even march on the streets in protest for you,
But I don’t trust them, cos while their leaders get famous
I still don’t see Justice free amongst us.
I wrote a poem for you Justice,
But I fear that’s the best I’m willing to do. I guess I’m just as guilty.
Just as complicit as the politicians and Judges, the police and all of civil society,
Who speak like they love you, but won’t dare to bleed
To see you freed.
Justice has been kidnapped in my country
And for her freedom we’re not willing to pay the cost
But until she’s found
We, my people, will be lost
Justice has been kidnapped in my country
And nobody, not even you, is willing to pay her ransom

Efe Paul performing "Justice has been kidnapped in my country."
at
Chill and Relax - The March Invasion edition of 2012.
Chill and Relax is an open mic Performance Poetry, Spoken Word and Soul Music event in Gbagada, Lagos. It holds every 2nd Sunday of the month.